Losing a job and finding a vocation

Ken Harbourne tells Sean Gallagher how he started his recruitment firm when he was made redundant.

The start of New Year is a time when many people take stock of their lives and, in particular, their career choices. They ask important questions as to whether they are in the right job or even the right sector. For those who feel unfulfilled, it's the perfect time to set new objectives and hatch new plans for moving into a new career that better matches their true potential.

So who better to interview this week than Ken Harbourne, founder and managing director of recruitment specialists, Wallace Myers International. Apart from his experience and expertise as an international recruiter, Ken's own story is an inspiring one. Having lost his job when the recruitment business in which he worked closed down in 2010, Ken decided to set up his own recruitment company. With nothing more than €15,000 he received as part of his redundancy settlement, he has succeeded in growing Wallace Myers International to 34 staff and a turnover of more than €5.5m in less than 6 years.

"We always expect the New Year period to be a busy time as people reflect on the year ahead. However, recruitment is one of those sectors that is busy all year round. This is especially true for our business because our focus is across a range of office-based professional roles from accounting and finance to legal, HR and sales as well as marketing, technology, business support and administration," says Ken. "And we also have a separate division dedicated specifically to finding staff and managers for the retail sector," he adds.

Around 90pc of the company's customers are based in Ireland and include everyone from large multi-national firms and those supplying MNC's to high growth startups and Irish firms that are trading internationally. In addition, his company also places candidates in countries where his Irish customers have overseas operations. As part of his ambitious plan to internationalise the business, he has also recently opened an office in Prague where he employs four staff.

But the journey for Ken Harbourne has not all been plain sailing. He grew up in Beaumont on Dublin's north side where his father worked as MD of Peugeot Ireland. So business and a strong work ethic were principles he was exposed to from an early age. Like many future entrepreneurs, he had a variety of part-time jobs, from serving in a bar to working in a printing factory.

After school, he completed a degree in marketing at the Marketing Institute in Dun Laoghaire while at the same time putting in 30 hours a week as a manager with Dunnes Stores.

In 1999 and armed with his degree, he landed a job with Calibre Recruitment largely on the basis of the results of a personality profile assessment that identified his Ideal job to be that of a recruitment consultant. The role turned out to correctly match both his interests and his aptitudes.

"The owner of the company was very direct at the time and told me: 'Generate €10,000 a month or we'll fire you'. That was certainly a strong motivator," says Ken, who was then handed a phone and a copy of the Yellow Pages and told to get to work.

The new recruiter took to his role quickly. Immediately, he got out his old Dunnes Stores list of suppliers and rang them to see if they had any jobs that needed filling. After only two months in the job, he had broken the company's sales record and within six months was generating 70pc of the company's entire revenue. This was a significant achievement given that the company had 30 recruitment consultants at the time. After a year there, he was ready for a change and headed to Australia where he spent the next year working in recruitment placing Irish and UK candidates in banking roles within Sydney.

In 2001, he returned home to Ireland where he was offered a job managing the Irish Operations of Robert Half International, the world's oldest and most profitable recruitment company. At the time, the company had only two employees in Ireland and was haemorrhaging over €200,00 a year in losses. However, in less than four years Ken had successfully managed to turn the company around to where it was employing 35 staff and making over €600,000 net profit per year.

"Then suddenly in 2010, with the recession kicking in, Robert Half decided to pull out of several European countries, including Ireland. The news came without warning and after nearly seven years with the company, the team and I were made redundant. The office closed down an hour later," says Ken. "I remember calling my wife who was in tears on the phone. We had a Celtic Tiger mortgage at the time and our first child on the way, we just couldn't believe it," he adds.

However, with commitments to meet and few other options available to him at the time, Ken decided to set up Wallace Myers International two days later. Where did he come up with the name? I ask.

With every cent of his €15,000 redundancy package now invested in the business, Ken rented a small office in Dublin 2. Having secured his recruitment agency license, he was now in business for himself. "To be honest, it was a scary time because when you're a start-up and unproven, it's a big challenge to attract large clients and top performing candidates," says Ken. "However, I soon found out that when your back is to the wall, you'll find a way to make it work if you have to. And I had to," he adds.

From the very outset, he set about building a brand with strong competitive advantages that included implementing a world-class operating model based on his 17 years' experience in the sector, being ethical and acting in the client's or candidate's best interests, and taking the long-term perspective by putting the client's interests ahead of securing short-term fees.

"These principles, together with the quality of our staff, have proved key to the company's success," says Ken. "In our industry, you are only as good as the consultant that represents you - and that's where we win," he says.

As he looks to the future now, Ken plans to open at least three more European offices over the next five years and to grow annual revenues to €40m over the same timeframe. Even with such success, he has not forgotten the challenges he faced along the way and today continues to give back to the community through his support for Jobcare - a local non-profit initiative that assists professionally skilled individuals or graduates who are finding it difficult to find work.

What Ken Harbourne has managed to achieve is remarkable. From losing his job, to investing all of his redundancy into his new venture, he has successfully built Wallace Myers International to 34 staff and a turnover of more than €5.5m in less than six years. And with his sights now firmly set on internationalising the business, he looks like he's only getting warmed up.

"It's funny to think that had I not been made redundant, I'd still be working for my old employer now," he adds with a smile.

*This article was first published on independent.ie
** Photo: David Conachy 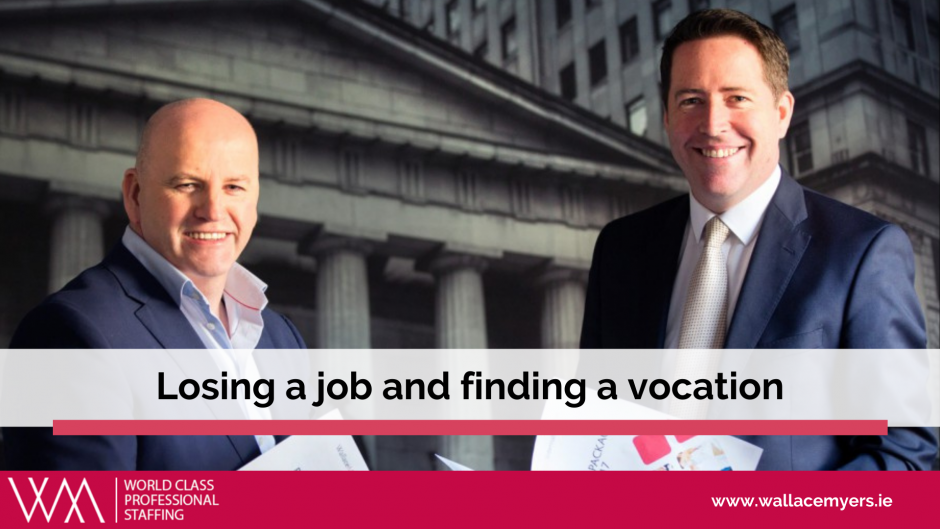