The Importance of Feedback for The Candidates You Don’t Hire

With employment levels so high the balance of power has flipped. It is now 100% an employee's market out there.

Organisations run the risk of leaving a bad taste in prospective talent's mouth if they are not doing the simple things, like returning calls or giving closure to candidates and above all else not offering any feedback.

Why You Should Give Everyone Feedback after Interviews

You might want to hire them in the future. Giving a candidate constructive feedback even if they are unsuccessful makes their experience with you positive. Just because they did not come out on top does not mean that they will not be a great asset in a few months/years. They will be very keen to talk again if they received positive constructive feedback the first time around.

Your company’s reputation. At the very least, those candidates who are interviewed but not hired become brand ambassadors with good feedback. Their message to others becomes “I interviewed with x. I didn’t get the job, but the feedback was good and I enjoyed the experience” rather than “X is not a company I want to work for. I interviewed with them and then heard nothing”.

It’s the right thing to do. At some point, we have all been that candidate who is working really hard on nailing the interview but for one reason or another doesn’t get the job. Would you not have preferred to have some kind of feedback rather than forever seconding guessing what went wrong?

Feedback can help them nail the next interview. Honest, constructive, feedback gives solid advice on areas that candidates can work on. Therefore, improving their interview skills for next time.

An Example of Helpful Interview Feedback

Below is an example of feedback I recently received from a client during a very competitive hiring process. This feedback gave the unsuccessful candidate value from the process and closure.

"Some feedback for Candidate X:

Honestly, I felt [he] was a very strong candidate with good experience. He probably seemed a tad nervous initially but he definitely relaxed as the interview went on. By the time [John] came in for the "fit" piece he was very much at ease and we felt we were seeing the real Candidate X.

His excel exercise was spot on. He struck me as very diligent, very hard working and dependable.

There really were no downsides. We just felt that we can potentially offer Candidate Y more in terms of development and culturally they are probably a better fit. That said Candidate X was very personable. I'd be grateful if you could ensure he gets that feedback. I don't think he'll have any issues picking up a different role. Please ensure him that we were impressed but he was just pipped at the post. Thanks"

This feedback was useful because it helped Candidate X recognise areas that can be improved, like working on his nerves and being himself. I know from speaking with Candidate X that it also helped his confidence as the feedback pinpoints specific areas that the interviewer was impressed with.

You are busy. That’s the number one reason for the lack of feedback.

I accept and respect that, but I ask you to do just one thing. Add one extra minute to your allotted interview time so that after the candidate has gone you can jot down the answers to two questions –

• How could they improve in interviews?

Doing this means that when you are speaking to your recruitment agency/ HR team you can quickly share your notes to be passed on.

That one minute extra could be the difference between someone getting the next job and growing in their career and someone struggling to move forward without feedback. 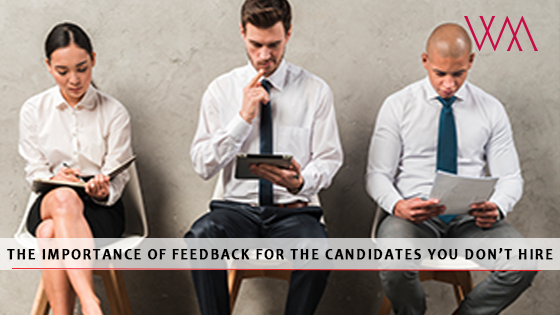